The Mysteries of Bradford and Micron Counts

A word of warning – there is more to a fiber than the numbers that define it, there is no measurement for crimp, elasticity, luster or durability which should be considered. Touch is an inherently subjective sense, what one person experiences will never be duplicated. What is soft to one person is not as soft to another. Options like Micron and Bradford systems give us an objective measurable way to qualify what is soft, but they don’t tell us everything about a fiber.

Want to learn more about the systems?

Micron is the system of measurement that is completely objective it is the physical measurement of the diameter of the wool. There is no analysis of crimp, luster, elasticity, or technically texture, there is no element of how a fiber responds. A superwash 26µ wool might feel to the touch “softer” than a 23µ of the same breed, because of how superwash changes the structure of the scales. At the same time two fibers of the same micron count can feel totally different to the touch due to the crimp of the fibers.

The general assumption of finer is softer is a fair assumption, however is not universally true. The Micron count means slightly different things between camilid, sheep, goat and rabbit fibers. The different spices of animal has different fiber structure which leads to variations between “softness” which is subjective.

Because micron is an objective standard you find it as a newly judged section at some fiber festivals. The Optical Fiber Diameter Analyzer (OFDA) can analyze 4,000 fibers in 30 seconds and includes a portable unit that can be set up right in a shearing pen. If you’ve been to a major fiber festival, gone to the fleece competition area, and seen people in white lab coats standing next to impressive-looking machines, those people were no doubt measuring the microns of different fleeces. 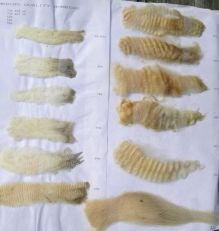 This system is defined as the number of hanks of yarn that can be spun from a pound of wool. A hank of wool is 560 yards long (560 yd/lb = 1.129 km/kg). In theory a pound of 62s wool could produce 34720 yards of yarn. However, this is a truly subjective measurement system. The rougher the wool, the thicker each fiber, and the fewer fibers per pound, which means less yarn can be spun from that pound of fiber.

The system was created as an estimation system by wool handlers in the English city of Bradford. It was based on processed and cleaned top fibers. However different spinners feel different ways about the crimp and the texture or three-dimensional shape of the fibers.

The U.S. Department of Agriculture (USDA) has assigned specific micron ranges to those Bradford wool grades, resulting in the USDA wool grades. These grade become more precise as they allow for the amount of acceptable deviations in the fibers.

It is even stricter for Wool Top blends of fleeces. Grade 80’s “Wool top with an average fiber
diameter of 18.10 to 19.59 microns, inclusive, and a fiber diameter dispersion that meets the following requirements:

The Blood System (What I consider to be the worse system) Picking fibers by Numbers: The dangers of using numbers to pick your fibers –

In a world where it seems like everything must be as soft as possible we forget that each breed has its place and purpose among our projects. Not everything needs to be knit in the softest, most delicate wool. Some projects require something more durable. Mittens to use with your snow blower or a hat that you need to keep you warm. Perhaps a felted doorstop, a tea cozy, or a heavier coat. These kinds of projects long to be made out of hearty, warm wools that are otherwise too robust for next-to-skin wear. In contrast, using superfine baby Merino cannot stand the amount of were and abuse and make your project with merino and your mittens are destroyed.

Don’t judge a fiber by the single repetition of it, yarn can also become scratchy by human intervention, not by fault of the sheep. In some cases overzealous processors, and not the animals themselves, are often responsible for the dry, brittle, and lifeless wool yarns you may encounter.

The ultimate decision on softness lies in the hands of the beholder. When it comes to touch, each person’s perception varies dramatically. I love all fiber types and I am more likely to be critical of how a fiber is processed than the texture of the fiber nothing feels scratchy to me. I where socks made with Icelandic and love their warmth and indestructibility after years of wear, but my best friend just about breaks out in hives if she works with anything but the finest, Merino (in her projects if it doesn’t have 20% silk it’s not soft enough).

Please don’t discount anything until you actually sit down and work with it. Each new breed brings a new fiber experience. Adjust your expectations and you can start to have fun traveling the world with different wools. Non-Merino breeds feel different- that’s the whole point.

Comments will be approved before showing up.

Color! dyeing with markers Featured Fiber of The Month Club how to blend fiber on a blending board how to dye how to dye wool how to dye yarn how to make tweed yarn paradise fibers Roving Spinning Tips and Tricks Spinning Videos Staff Picks tutorial unconventional Videos & Tutorials wool Wool and Roving Info yarn

The Next Big Thing in Hand Dyed Roving and Yarn!

How to Make Tweed Yarn in 10 Easy Steps!

Happy birthday to our Fiber of the Month Club! It’s been five years of mystery fiber goodness! So today, we are going to explore special birthdays from different cultures! From the Latin American quinceañera to the Japanese kanreki, all over the world humanity celebrates landmark birthdays, and here we are to celebrate ours with you! […]