How to… Embed locks into a single to later ply 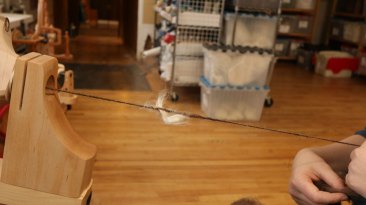 Personally, “Art Yarn” or novelty yarn is one of the hardest things to learn or re-learn how to make. After spending so much time attempting to learn to spin even and fine, thinking you’re going to make so much yarn for lace-work or handspun sock yarn, spinning in any way that is not uniform becomes more difficult.

So Embedding locks of un-carded fiber into yarn that you’re comfortable spinning is a nice half step towards making some of the crazy cool yarn you’ll find anywhere from galleries to your neighbors favorite cowl.

Here we are spinning to later ply, by either plying the yarn back on to itself, or with something else a commercial metallic shiny thread, super fine handspun single. If you’re not going to ply the yarn back on itself, I would suggest that you pick something with a diameter equal or thinner than what you are spinning that way you can better show off the embedded locks.

Deciding how far apart to place the locks effects the general look of the yarn, if you’re not plying back on itself, then every placement of lock is where it will be in the finished look. When plying back on itself you will have double the number of locks so think about this when you place locks.

Start spinning like you would normally, then pinch to stop the twist, stop treadling! Don’t let the twist get past your fingers or you won’t be able to fully embed the lock.

If you’re not working with thin roving consider some pre-drafting, so that the yarn that will be on the other side of where you place the lock will be the same size or a tiny bit bigger than the regular diameter of the single.

Spilt your roving into a Y lay your lock how you want it to be shown. This could be so that the tip is out, and the base of the lock with be embedded into the yarn or you can lay the lock so that it is split evenly between the two sides or allow for it so seem as if it is growing out of the yarn.

Start treadling and then move your hands so that the twist has caught both sides of the lock of fiber embedding it into the yarn.

At the start there’s going to be lots of start and stop but as you get better the pauses to embed the lock will get smaller and smaller so that it will feel like just a pause in the peddling.

Here we are embedding locks of mohair, which the more you handle the yarn will lead to a fuzzy halo effect, but you can do this skill with any washed lock of fiber like Wensleydale or un-carded Merino.

Comments will be approved before showing up.

Color! dyeing with markers Featured Fiber of The Month Club how to blend fiber on a blending board how to dye how to dye wool how to dye yarn how to make tweed yarn paradise fibers Roving Spinning Tips and Tricks Spinning Videos Staff Picks tutorial unconventional Videos & Tutorials wool Wool and Roving Info yarn

The Next Big Thing in Hand Dyed Roving and Yarn!

How to Make Tweed Yarn in 10 Easy Steps!

Happy birthday to our Fiber of the Month Club! It’s been five years of mystery fiber goodness! So today, we are going to explore special birthdays from different cultures! From the Latin American quinceañera to the Japanese kanreki, all over the world humanity celebrates landmark birthdays, and here we are to celebrate ours with you! […]